Made in Sheffield: The Story Behind the Hat 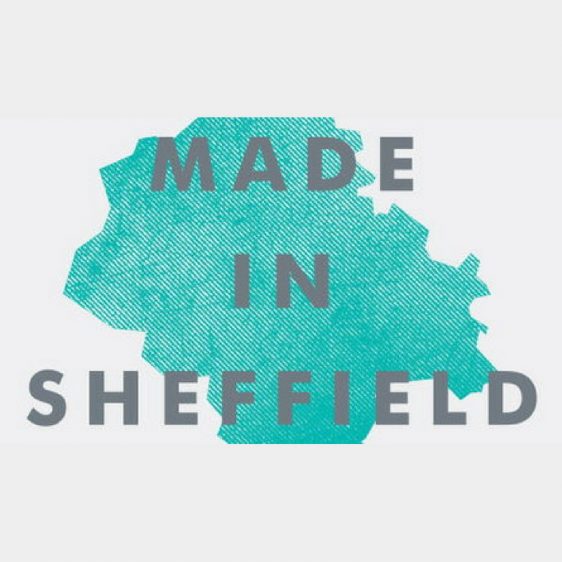 Today a brand new exhibition opened at Millennium Gallery where it will run until 8th January 2017.

Usually, I wouldn’t write about a new exhibition, but this one is a little bit special, as I am in it. Well, obviously not me, literally, but my hat is!

To have been invited as one of the makers to take part in Made in Sheffield is, quite frankly, a massive honour. The exhibition will feature work from over 150 creative businesses and artists as part of the city-wide initiative, The Year of Making. I genuinely never ever imagined I would ever be involved in something quite so prestigious!

The invitation to take part was originally offered during Open Studios at Exchange Place, back in November last year.  Naturally, I decided that I wanted to make something special for the six month exhibition.  I had a little think and decided that my inspiration for the piece should be, well, making!  I also wanted to celebrate collaboration, traditional skills and modern technology.

Not too much to cram into my brief for myself then!

One of the most recent technologies to be used in millinery is laser cutting.  I’d seen some fabulous geometric, flora and fauna based designs via my daily Pintrest forays, but they just didn’t feel right with my “traditional” brief. Then I spotted some shoes that were spot on….well you don’t get more traditional than a pair of brogues! And then followed some serious shoe shopping on Pintrest, all in the name of research naturally.

My next job was to decide what material to make the design with.  Obviously, shoes are made from leather so this seemed like the natural choice. But I’ve never actually worked with leather before!  Luckily, I have my #girlgang of Hat Stand Sheffield milliners, both past and present, so I was able to get lots of advice from them about how to go about working with it.  I was also able to call on the expertise of Kathryn Sillince of Magpie Accessories (also of Exchange Place Studios) for general advice about working with leather and potential pitfalls.

So design inspiration chosen, materials chosen, I just had to think about the technicalities of a practice that I knew nothing about (I really wasn’t making life easy for myself with this idea!).  My next port of call was to see our resident “laserist” at Exchange Place Studios, the brilliant Giles Grover of Small Machines.

Giles normally makes toys, but not just any old toys.  Cool toys.  Toys that come in kit form that you can build yourself. Toys that work by hydraulics, or shoot stuff…I mean who doesn’t think a ballista is cool?

But I also knew that Giles had worked with other designers such as M-Dex Design and The Owlery, so if he would agree to help me, I was going to be in very good company!

Giles and myself had a long chat in January this year about the capabilities of his kit, the limitations of my material of choice and ironed out quite a few potential hazards. We agreed we would come back together once the invitation was formalised.  Then on the second day of The Hat Stand, the email landed…as did the deadline! Suddenly, a project which had been on the back burner for 4 months needed to be completed in three weeks! Cue action stations.

My first job was to design the decoration for the hat. Whilst I wanted the design to incorporate a brogue toe cap, I wanted to avoid the hat looking too “shoe-like”, I’m not Elsa Schiaparelli!

Giles recommended a (free!) software program I could download  that would allow me to trace the required design and manipulate it to suit my design. 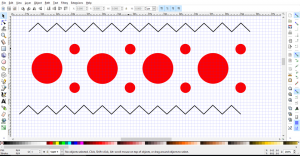 This was quite time consuming as I was learning the programme at the same time, but I was very pleased with the results

Once the pattern was in digital form, this was transferred to the laser cutter’s software….and our first trial was under way!

Back in my studio…

My next job (whilst Giles got on with some very urgent orders for himself!) was to get the basics of my hat made. I settled in for some serious blocking and sewing sessions.

Due to my inexperience with leather, I chose a shape that I knew I could block confidently and that would offer some design “wiggle-space” if things didn’t go quite according to plan. I didn’t have time for a trial run so a Plans A-D were definitely required. But I did block a couple of spares, just in case things went really, really wrong! 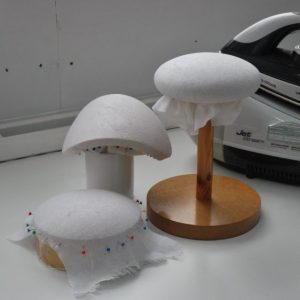 Firstly, I need to get two layers of foundation fabric, buckram, blocked.  This would give my hat the strength to survive being pulled around when I stretched the leather over it.

I then sewed a wire into the edge of the hat to add further strength and prevent it stretching during the process of attaching the leather.

After that, a layer of ice wool was sewn over the top.  The leather I used was quite thin, almost gloving leather, so without this underlay the texture of the buckram would show through, spoiling the smoothness of the finished hat.

I also added a bias strip of tarlatan just inside the edge of the hat.  This would allow me an anchor point to sew the leather into.  I couldn’t stitch through the buckram, ice wool and leather without potentially doing myself, or the hat, an injury!

Finally, I could start pinned my proposed decoration to the skeleton of the hat to gauge the proportions and positioning of my paper templates.

The next step was to attach the leather to the hat, but as with anything millinery related, there was more to this seemingly simple task than meets the eye.  Firstly, I had to block the leather over my hat block to stretch and shape it as much as possible before it was attached to the hat.  Then, once it was fully dry, I pinned it in place over the buckram skeleton.  Three rounds of pinning later, with each session easing out more and more creases at the edge, I was ready to start sewing it in place…again, easing out those pesky creases. 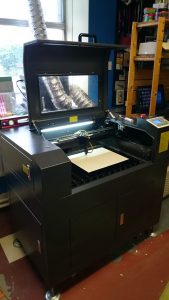 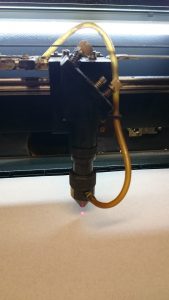 Now for the most daunting part of the whole process, actually laser cutting the leather.  I don’t mind admitting that this was possibly the scariest bit! I was now completely reliant on Giles’ expertise, experience and equipment to make this hat happen.  No pressure Giles!

I was worrying for nothing though.  Thanks to all the prep work we had done, the process was pretty straight forward and surprisingly quick.  There’s no denying it wasn’t a bit stinky though!!! 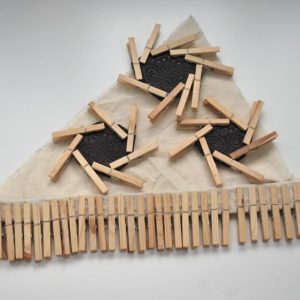 But I was now on my own again now with the project.

Kathryn (whom I mentioned earlier) very kindly gifted me a scrap of contrast colour leather to use in my design.

I now needed to create a series of leather sandwiches formed of my laser cut leather and Kathryn’s kind donation. One of the panels also had wire inserted in to the layers.

As you can see, things very quickly went from super hi-tech, to super lo-tech! 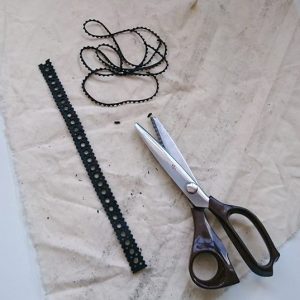 To give my brogue decoration the classic zigzag finish it required, I used pinking shears.  This allowed me to cut crisply through the bonded leather edges.

I created decorative panels (no spoilers yet!) along with brogue straps.  I wanted to create an element of height in the design of hat, along with a nod to the traditional laces of a brogue shoe, as well as the traditional loops and curls you may find in the trimming of a hat.

Then the final jobs were to assemble the decoration, add the elastic that would allow the hat to be worn, stitch in a suitable lining (I chose coordinating taffeta for this) and lastly cover all the joins with a further laser cut disc of leather. Whenever I make a hat, reaching these final steps is the best part…it means it’s nearly ready for it’s new home.

So finally, here it is.

After seven months in the planning and making, my brogue inspired leather hat featuring laser cut leather and incorporating the key themes, thanks to which I thrived over the last 10 years: Making, Collaboration, Traditional Skills and Modern Technology.

A huge thank you to everyone who has helped me make this hat.  Not least to the amazing Giles Grover of Small Machines for making this madcap idea,  reality.  It wouldn’t have been possible without his assistance or generosity with his time, skills and kit. I am indebted to you for your help. Thank you!

Ps. You’ll also be able to find more of Giles’ work at the exhibition too! 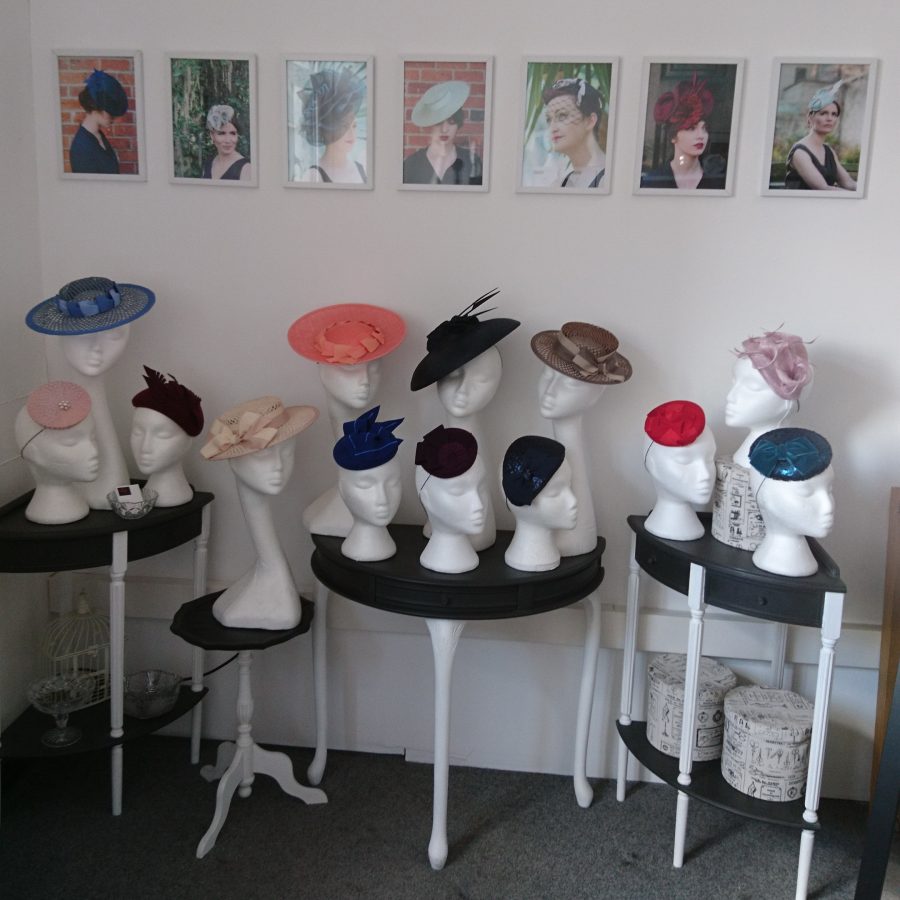 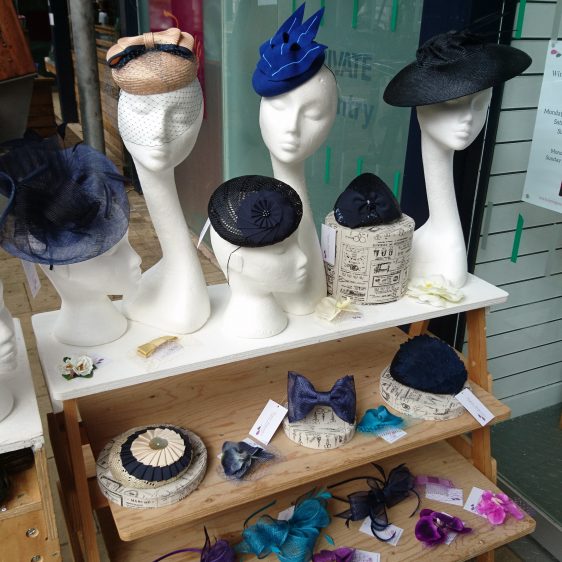 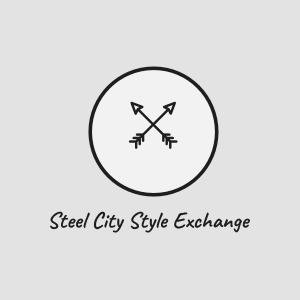 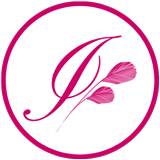 Back to top
© 2020 Imogen’s Imagination. Website by Double Six Digital.
This website uses cookies to improve your experience. We'll assume you're ok with this, however you can opt-out by changing your browser settings if you wish Find out more.